Born and raised in the North American Midwest, BC DiCiacco grew up seeing the world with child-like awe and amazement; he has always loved “playing with life”. As a young man, a traumatic motorcycle accident nearly took his life, which enhanced this wondrous outlook on life even more. “Live each day as though it were your last; one of these days, you will be right,” is BC’s living mantra. His NDA (Near Death Experience) also caused him to become deeply passionate about helping each person live the happiest, most fulfilled life possible, regardless of what that meant to each one.

In the Midwest, BC created his own custom furniture company and ran it successfully for more than 15 years, coinciding with his establishment of “Le.Ed.” (Leadership Education and Entrepreneur Development); a localized focus group that helped dozens of business owners to learn leadership skills and grow their revenues.

In 2015, BC felt the world calling to him, so in early 2016, BC closed shop, and traveled to Central America with a map and a backpack, seeking the source that was calling to him. After three months abroad, the entrepreneurial bug bit again; he is now the CEO (or “Creative Empowerment Officer”, as he prefers) for “A World Empowered, LLC”, a company which seeks out and initiates projects around the world that cultivate and perpetuate the empowerment of human beings. In addition, BC most recently created “Twenty Tuesday”; a global online community where people gather weekly for focused meditation that cultivates positivity, optimism, self-love and a higher world vibration. BC is a true consummate friend and compassionate soul, driven to be an uplifting force in the world.

During business studies with his own coach, Matt Shoup, BC was encouraged to create a warrior credo for himself. The credo was meant to be both a defining illustration and a guiding force that would solidify (in his own heart) who he is at his core, and would help keep him on track if ever he were lost; it is what he would fight to the death for, in the arena of life. With this single sentence, BC encapsulated the life that he exemplifies with every waking breath:

“Today I fight to be a shining example of Love, Light, Leadership, Legacy and Lifestyle, in the lives of everyone that I meet.” 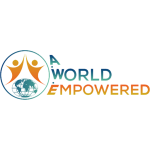 A.W.E. is a 501-c(3) non-profit organization based in Colorado, USA. We have a philanthropic vision of the World we can create.
Discover more